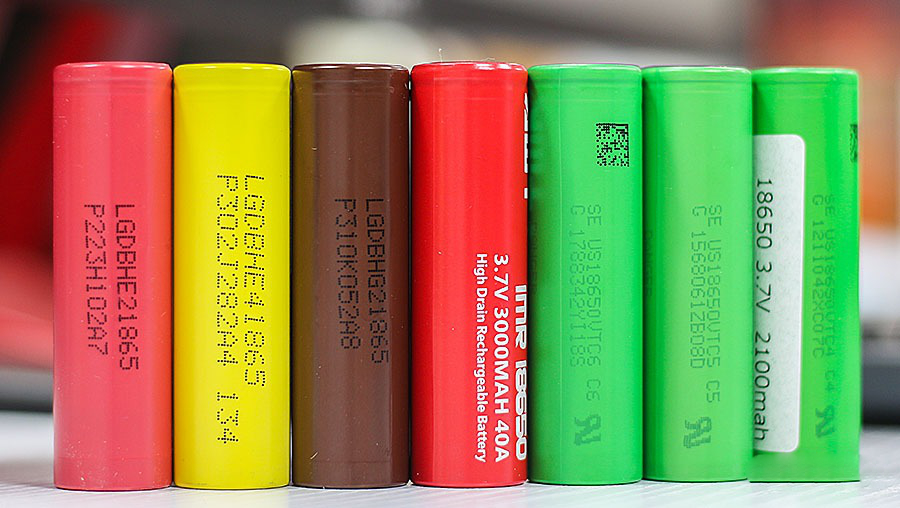 Although its price is relatively high to other materials, the lithium-ion battery has a light weight, large capacity, no memory effect, and thus has been widely used – many digital devices are used the lithium-ion battery for power.
Lithium-ion battery energy density is high, its capacity is the same weight of nickel-metal hydride batteries 1.5 to 2 times, and has a little self-discharge rate. Also, lithium-ion battery almost no “memory effect” and no toxic substances such as the advantages of its widely used important reason.
In fact, 18650 lithium battery in the strict sense is not a civilian finished battery; the most important use is as an industrial semi-finished product battery pack for some equipment power supply, such as our side of the laptop, razor, balanced car can see 18650 figure. 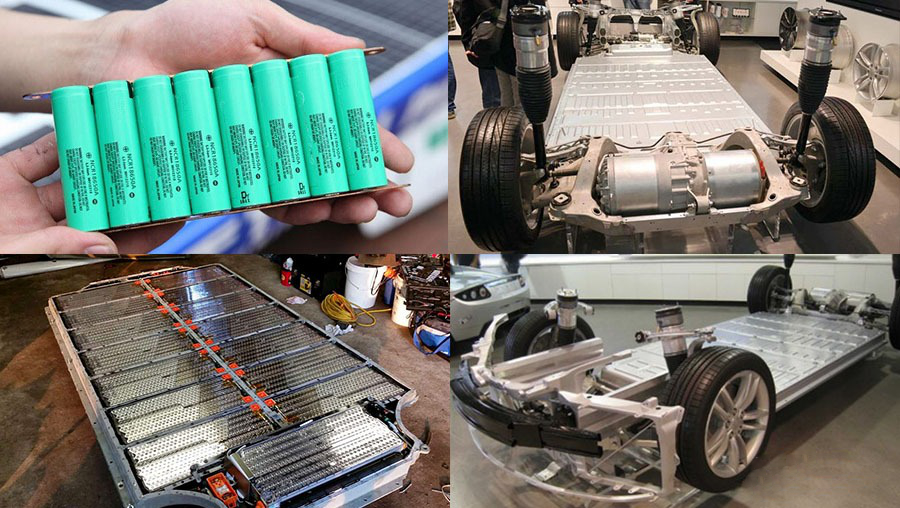 Even the famous international electric car – Tesla used by the battery pack is composed of 18650 lithium batteries, in the Tesla MODELS and MODELX models, a car in the number of 18650 batteries even more than 7,000!
Recently in the battery industry, a news, that is, Tesla will be in the new models on the use of the new “20700” battery used to replace the existing 18650, only say that the 20700 battery, although the unit than the 18650 battery larger, But improved the material after the 20700 energy density is greater than 18650, to achieve the same power required for the number of single cells will be reduced, reducing the weight of the vehicle to improve performance.

Tesla itself formed a “closed loop,” the new model of the battery can “self-produced,” but for other industries?
Although the 20700 and 21700 energy density is greater, with greater capacity, higher discharge current, is the future trend of development, for battery manufacturers, the new battery may make themselves stand out in the peer, more competitive force.
But to update the production line, put more money to improve the process, and the current lack of relevant application links, so the recent 20700 to replace the 18650 is still more challenging in the future, whether to become mainstream, but also to rely on downstream applications. 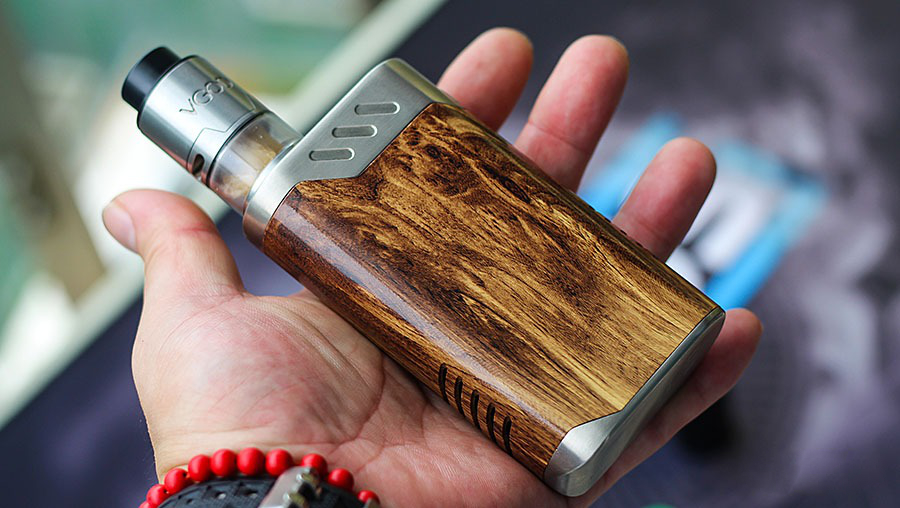 In the field of electronic cigarettes, IJOY has been in the new model on the battery constantly try, in 2016 has released a dual 26650 power supply host “LUX,” longer than the dual 18650 battery life, the output power is greater.

In 2017, IJOY as a pioneer has released a new type of battery-powered host – Captain PD270, dual 20700 battery-powered, this time will become the electronic cigarette host vane? 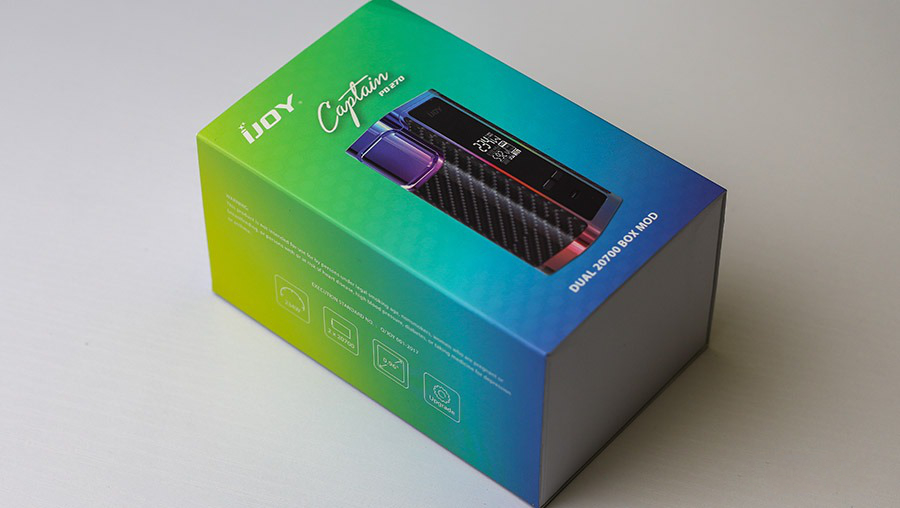 Captain PD270 uses a double-layer paper box, on behalf of “technology” and “healthy” blue and green colors as the primary color, “honeycomb” shape of the three-dimensional shading more express a “sense of science and technology.” 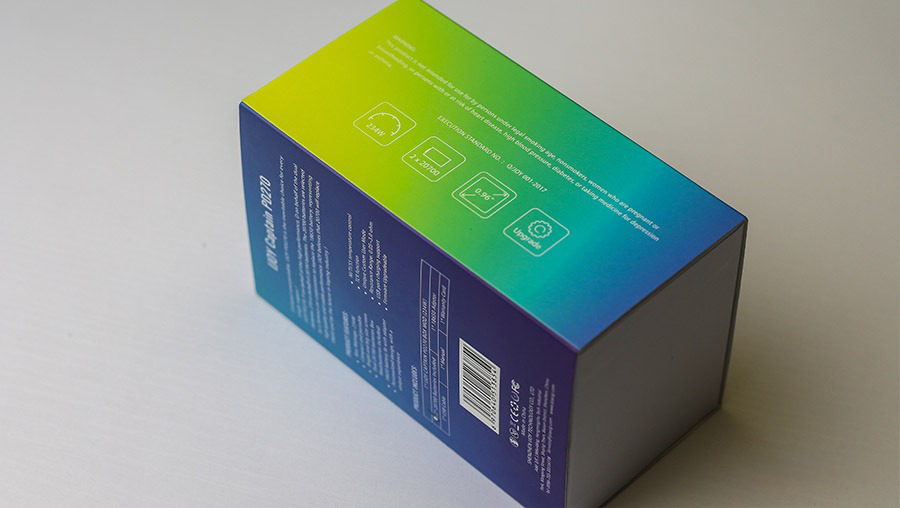 Packaging side of the product out of the four major features – 234W maximum output power, dual 20700 battery-powered, 0.96-inch display, firmware can be upgraded. 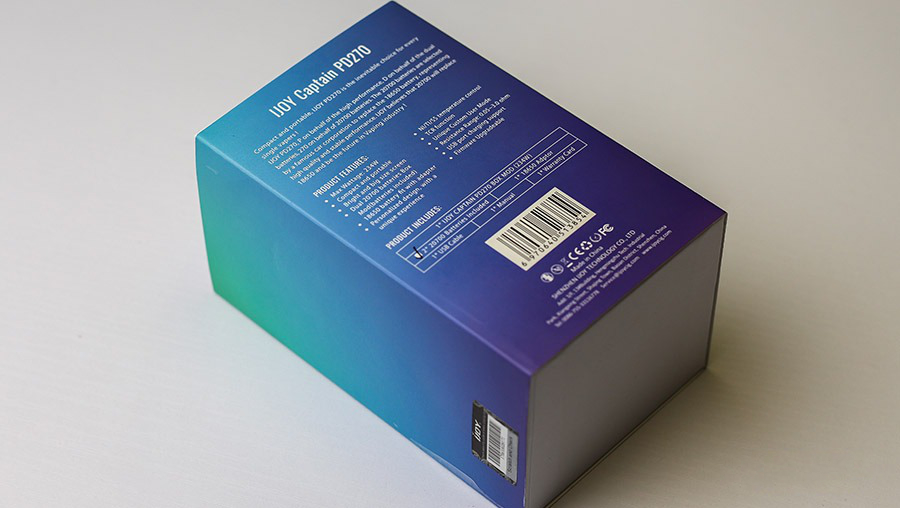 Packaging on the back of the contents of the full English, including the characteristics of the product overview and the main function, but the top of the paragraph revealed that IJOY for the 20700 to give high hopes.
PD270 “P” on behalf of high performance, “D” on behalf of double electricity, 270 on behalf of 20700 battery, IJOY believe that in the future of the electronic cigarette market, 20700 battery will replace the 18650 battery. 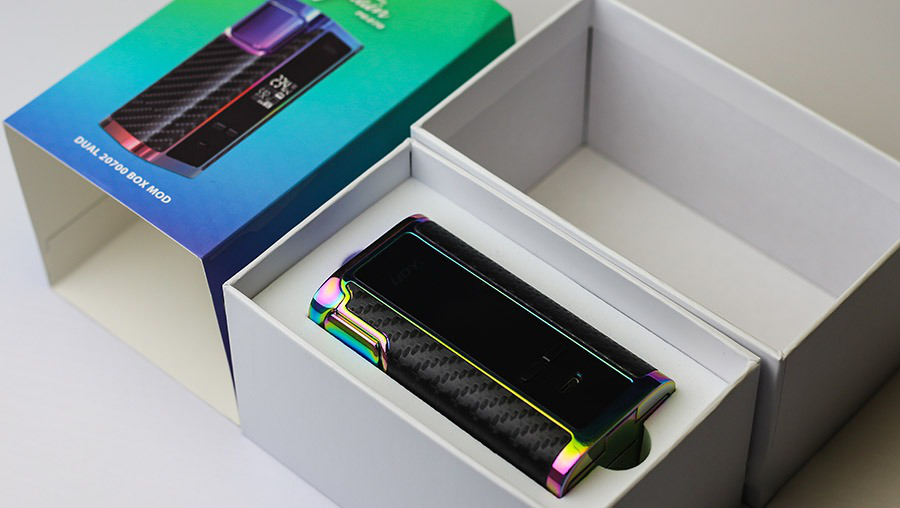 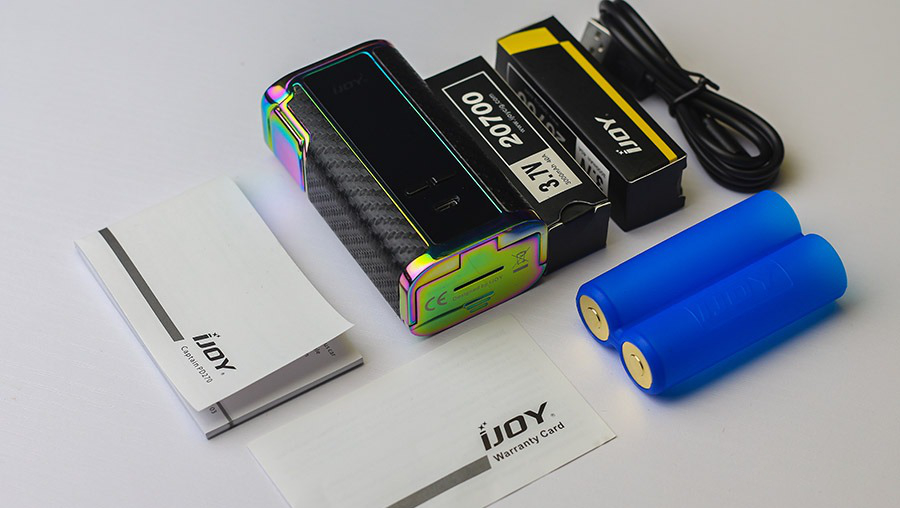 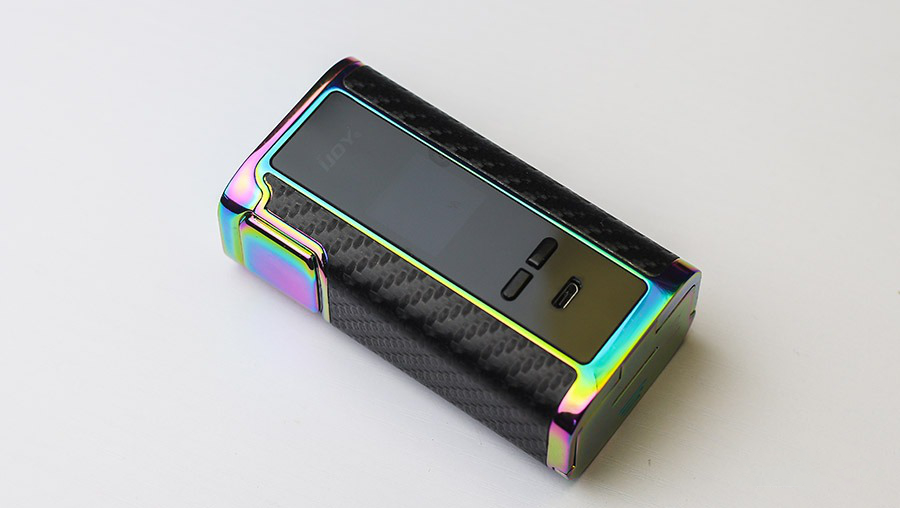 Captain PD270 body length of about 90mm, width 48mm, thickness 32mm, the main body for the rainbow color, the front fuselage for the screen and adjust the button, both sides of the carbon fiber patch as finishes. 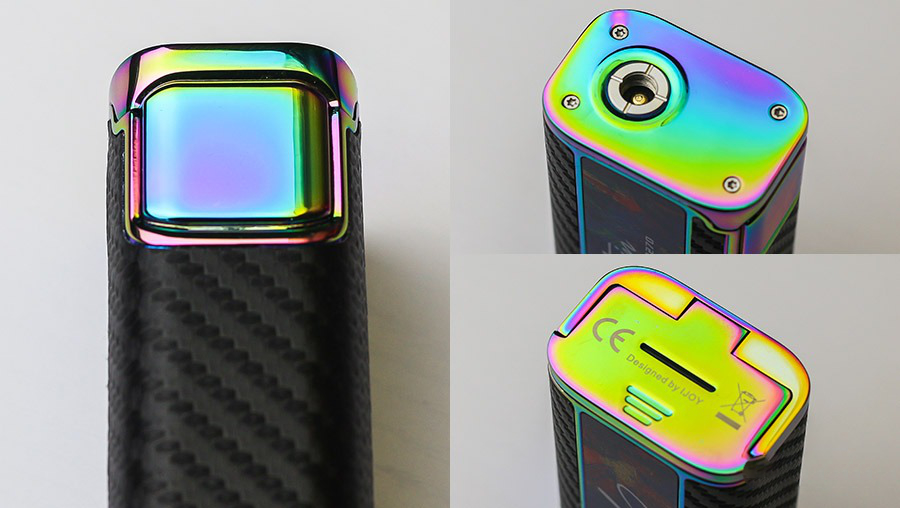 The size of the ignition button on the side of the fuselage reached 20x23mm.

0.96-inch display content is rich, including the output power, battery power, resistance, output current, output voltage, output mode, the number of smoking and smoking time and so on.

The back of the fuselage is a host panel with a decorative panel; the author personally thinks that if the use of “billion sea Kevlar” kind of luminous LOGO design, the effect will be cooler. 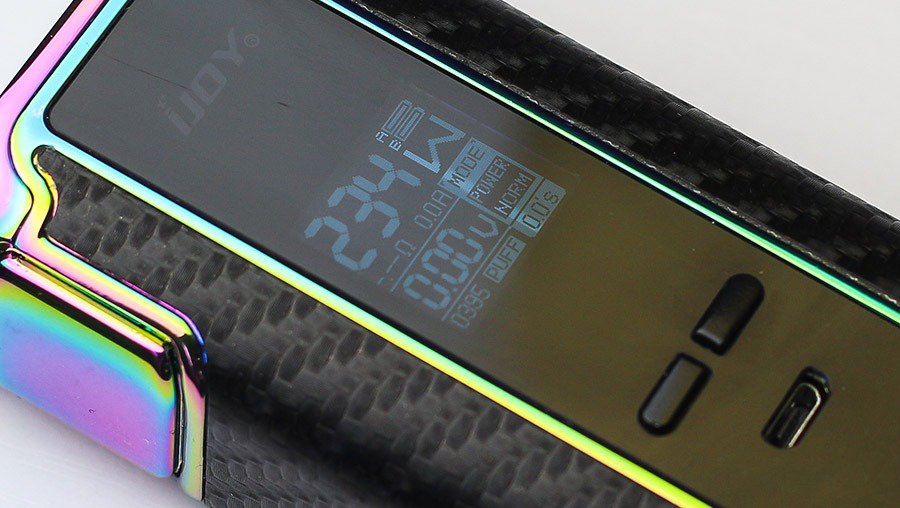 Captain PD270 battery compartment set in the bottom of the fuselage, press down and then gently push the outside to open.

Inside the battery cover with positive and negative identification, the installation of the battery should pay attention to the corresponding mark.

The battery cover also with A, B battery slot mark, if the battery has an exception can be screened on the corresponding screen distinction. 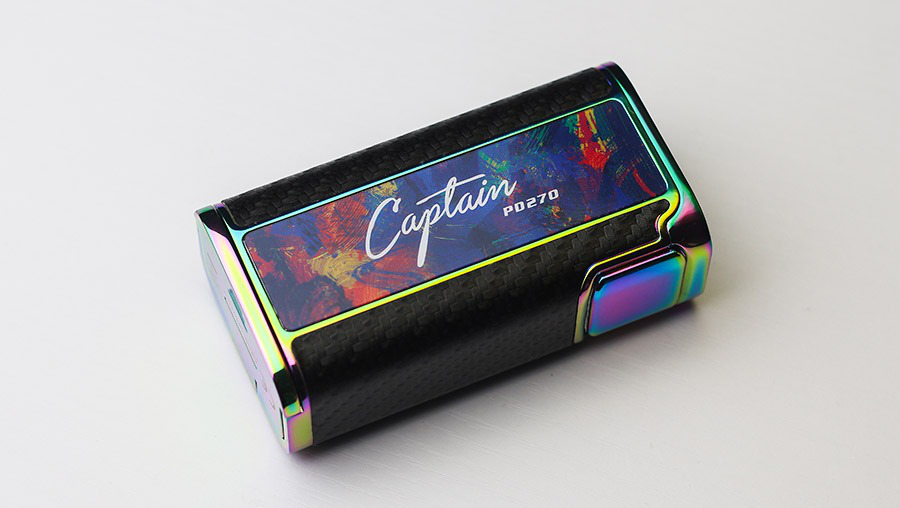 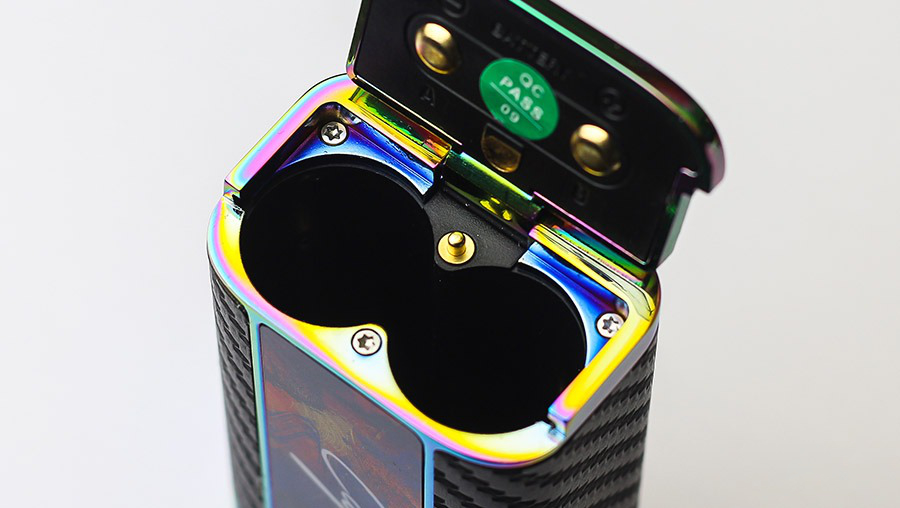 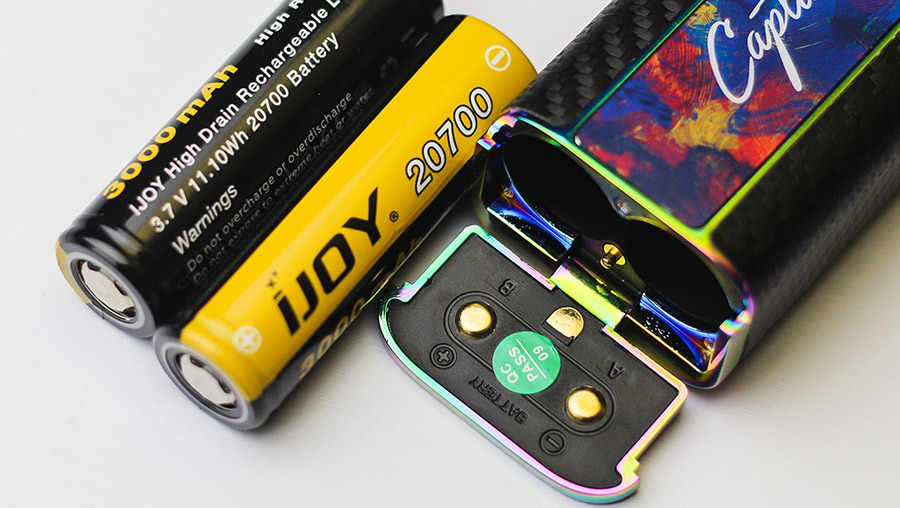 In the technical indicators, 20700 then the 18650 capacity and discharge current are two higher, but the advantages of a single battery are not very distinct, because the current market, many 18650 can be “nominal to” 3000mAh capacity, but Conventional 20A discharge data to inferior to 20700. 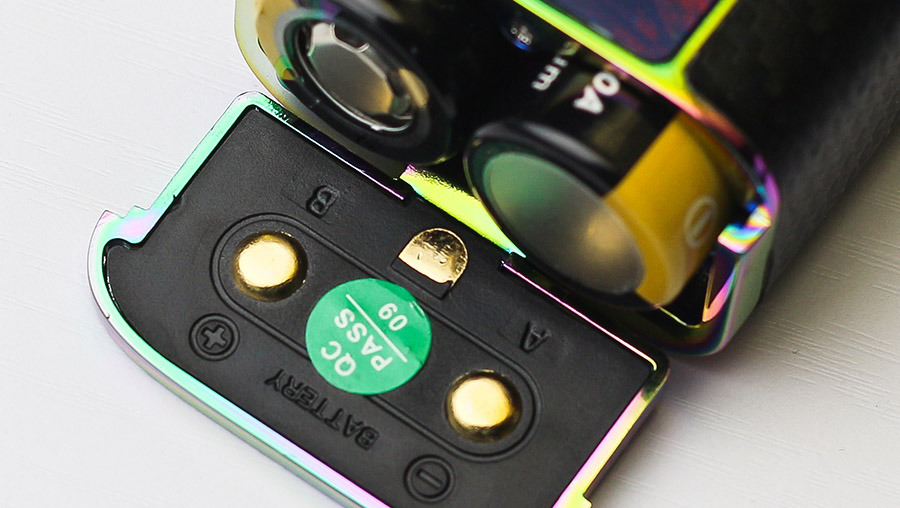 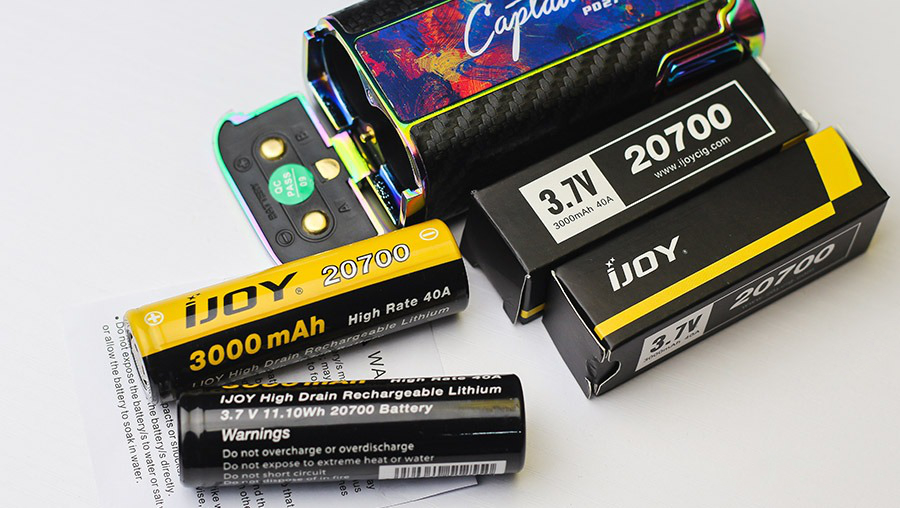 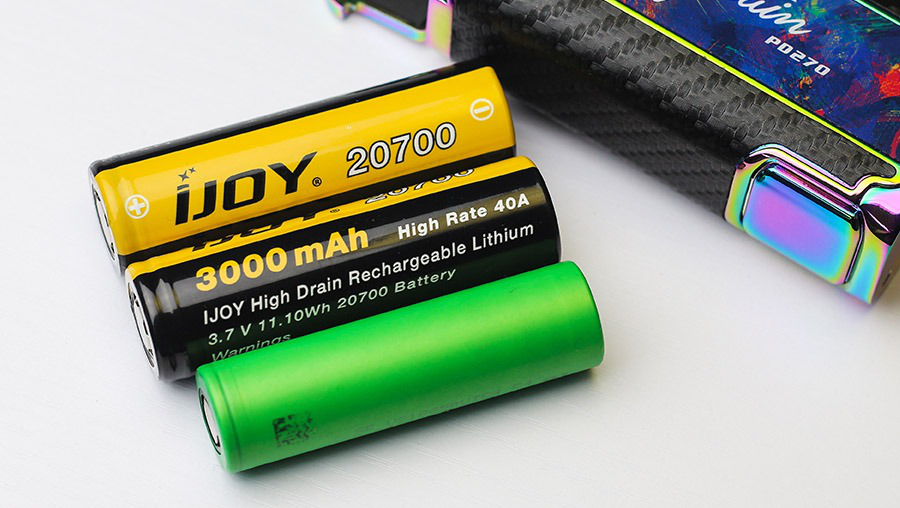 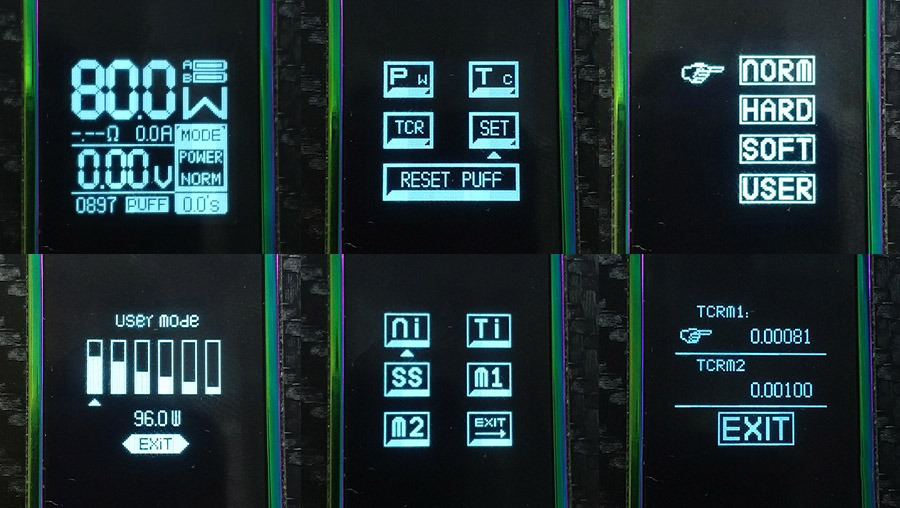 Captain PD270 is relatively straightforward to set, continuous fast press the ignition button 3 times to enter the graphical settings menu, which has power mode, temperature control mode, TCR, set, smoke port number zero icon, press the two adjustment keys to move the pointer, Press the ignition switch to enter the relevant settings function.
● Power mode ● Provides average output, HARD, soft, and USER-defined output functions, which are often called “custom output curves.”
● Custom output curve ● The output power can be changed in the power output mode.
For example, such as 0.15Ω resistor should be 90W, the use of custom curve can be raised to the first grid power to 120W, this will increase the explosive force of the coil, rapid warming.
Then set to 90W average output, the rest of the order is set to power down, the formation of a gradual decline in the production curve, to avoid the coil continued to rise to produce paste flavor.

● Custom output curve ● The model is more suitable for use with the fancy loop, both to make up for the lack of preheating, but also to avoid high power continuous electricity supply caused by smoke overheating or charred core.
Captain PD270 provides a 3-second time curve set, divided into six set nodes; each node corresponds to 0.5 seconds.

It is worth mentioning that, Captain PD270 custom model is used “percentage” curve, rather than the particular “power value.”

In simple terms, each time the key is pressed, it will increase or decrease by 10% depending on the currently set output power. The advantage of this setting is that if you replace the different nebulizer, the user only needs to adjust the current output power Yes, the chip will automatically calculate the output power of each node according to the curve, no longer set to continue to use their custom output curve.

If you press the “+” button on the right side, the power setting at the top of the screen will flash and adjust the power value at the current temperature with two adjustment keys.

TCR menu contains M1 and M2 two sets of values, through the ignition switch, adjust the key to improve, you will use the temperature control material TCR value input to the corresponding group, change the key after the fire button to move to EXIT Press the adjustment key to exit the setting. If you want to call this set of settings, in the temperature control mode to select the corresponding M1 or M2.
The game setting is set only when the screen is cast, providing four times from 10 seconds to 90 seconds. 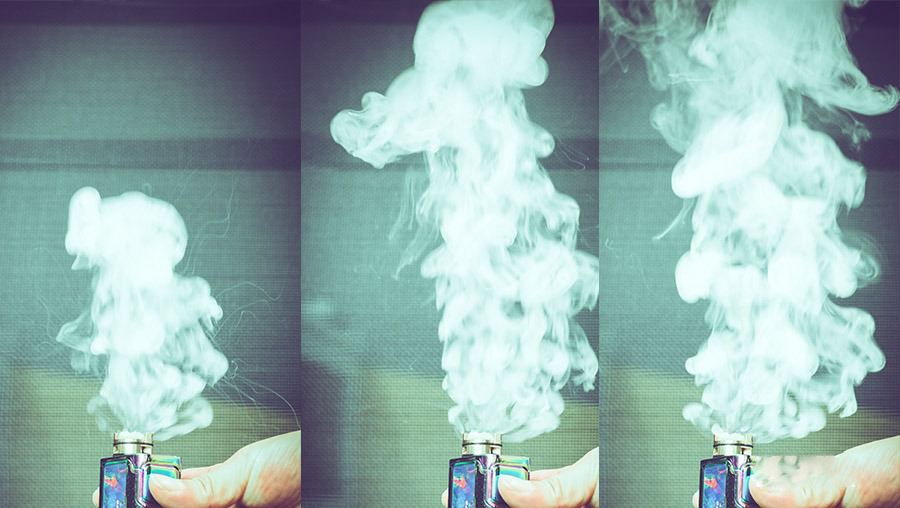 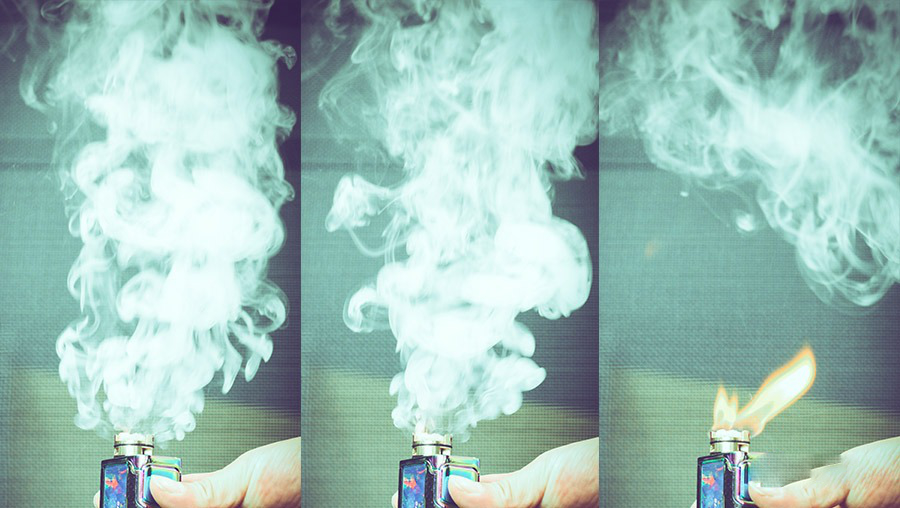 Potatoes double hair 0.05Ω at the highest power 234W smoke effect
Captain PD270 in the performance of the impressive, no delay ignition, output stability, with 20700 biggest advantage is reflected in the high power output under the great endurance. 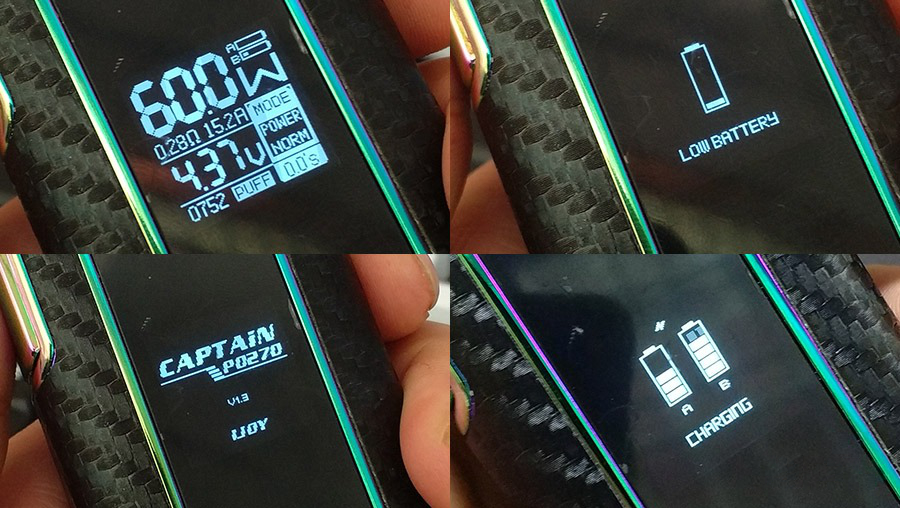 I experience the use of the power to 60W, from the first day of noon to use the next afternoon to run out of power, the host records the use of the mouth is 752 than the dual 18650 host in the high power output time to increase A lot of
This is a big smoke for the user is a great benefit, you can avoid frequent replacement of the battery, even if you do not have to carry the spare battery, full of electricity even after the big smoke output can also adhere to the day, when sleeping on the battery charge can.
When using the USB interface to charge, according to the icon displayed can be seen, the chip supports double power balance charge, which for the extension of the battery life is still very favorable. 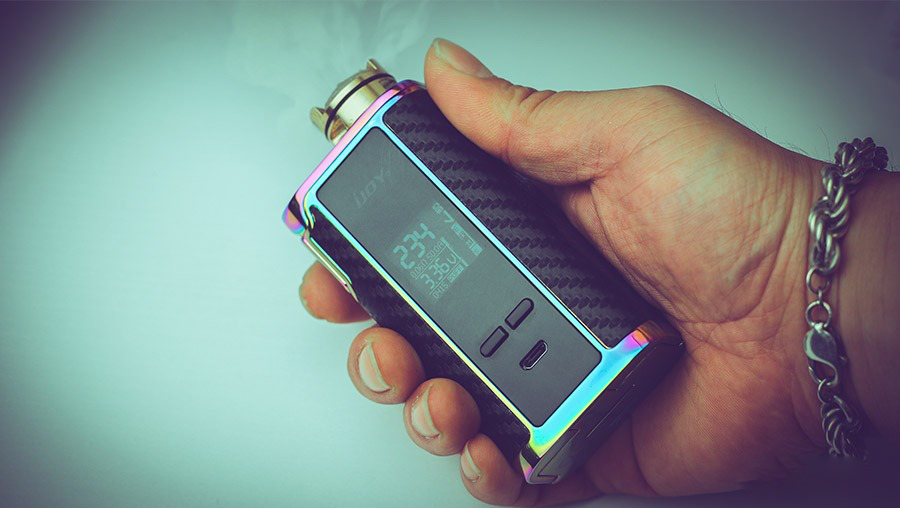 As a result of the use of the 20700 battery, the host of the corresponding increase in the volume of a lot, mainly reflected in the thickness, although 32mm can support large-scale atomizer, but for some people still slightly “straightforward and honest”, and useful in the fuselage Through the carbon fiber and other materials are divided into three regions, with four corners on the curvature of the fillet treatment, the visual weakened the thickness and width, providing a better feel. 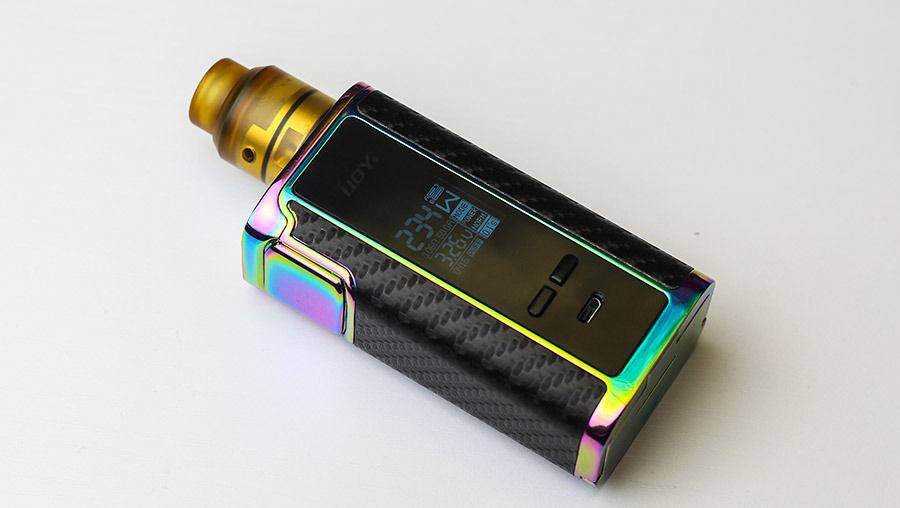 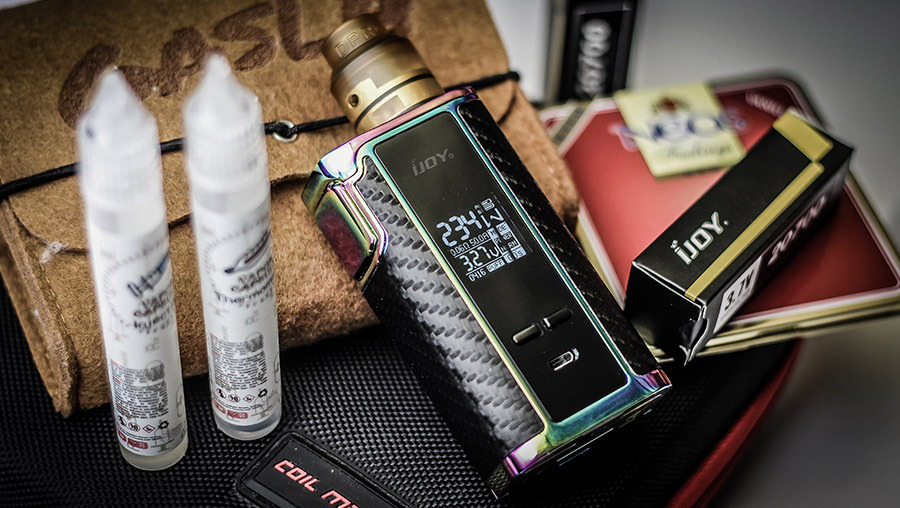 IJOY also Captain PD270 prepared dozens of different patterns of patches for users to buy the replacement, to create a more personalized appearance.

I think that if the host panel on the back of the panel can be more beautiful, using the more familiar light elements, will make the host cooler. Using the new 20700 battery, but did not use the latest type-c fast charge interface, can be considered a little regret. 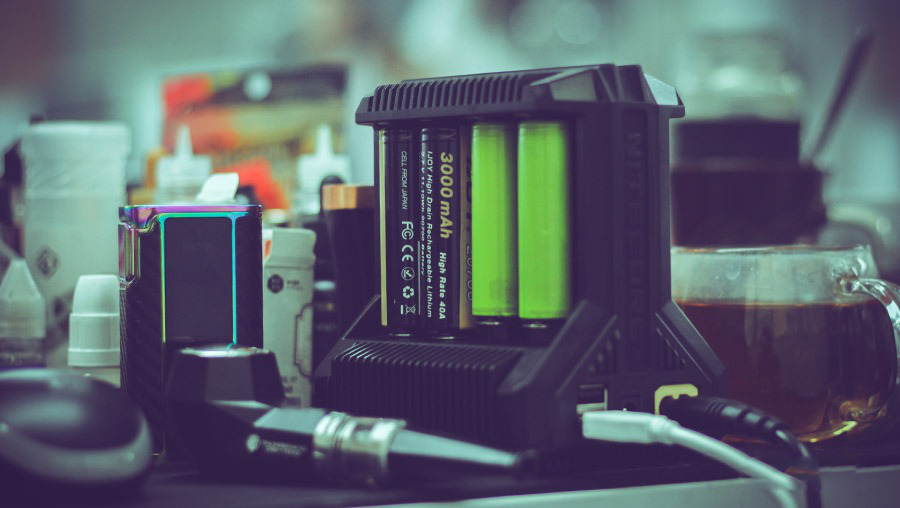 On the “20700” battery, I believe many of my friends are concerned about the traditional charger is to support this new size, in fact, 20700 only 18650 longer than 5mm, the author experimented with Knight Cole and several other brands of chargers, as long as Is the use of a spring-adaptive electrode, fundamentally compatible with the 20700 battery, the two battery charging voltage is no difference, so long as you can put the charger, you can charge.
Some fixed electrode charger, the maximum support only 65mm battery, it can not charge the 20700 battery. 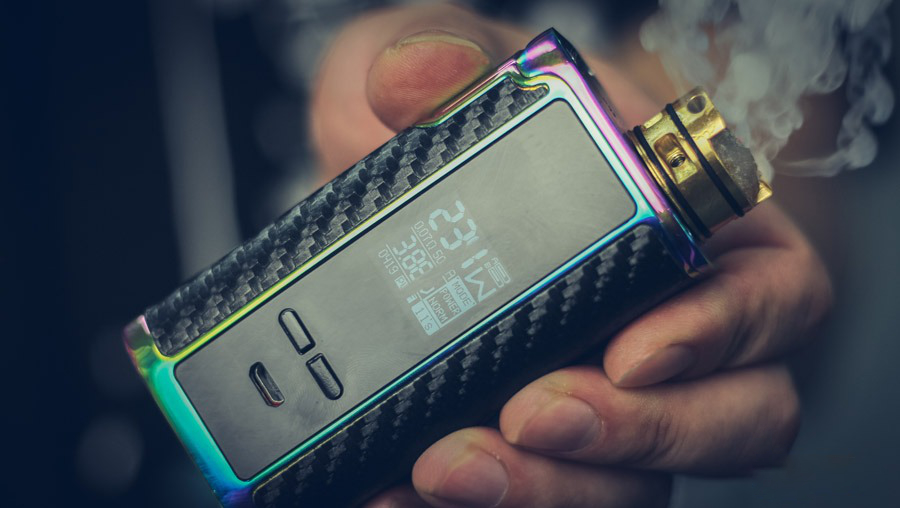 In the current high-power electronic cigarette host too much, the lack of innovation in the situation, the use of 20700 battery is undoubtedly an excellent idea, and in foreign markets, Kennedy, Purge, full edge, VC and other brands have also launched 20700 equipment, Much with the new battery to engage in some big things momentum.
IJOY addition to Captain PD270, there is a variety of 20700 mechanical rods will also be listed, we can see IJOY confidence for the 20700.

Tesla on the other side of the ocean may not dream, their own initiated a battery change, the first impact is the electronic cigarette industry, this time IJOY can break the “no-18650 equipment is not fire,” the curse? Let us wait and see.

IJOY Captain PD270 is currently only English packaging, divided into two versions of the ordinary version and TPD, the domestic sale for the average English text, the standard version is split into two, without stand-alone battery version and contains two 20700 battery version, Battery version of the terminal retail price of 598 yuan, 20700 battery in the electricity business platform prices vary, there are about 30 yuan is also about 90 yuan a section, and the sale of shops less, it is recommended for the purchase of direct Purchase a version containing the battery.
Packaging with 18650 to 20700 conversion kit, the user’s hands 18650 battery can also be used in the PD270.